Jim Gavin: Insights on Leadership on the Late Late Show

By Frances KeaneMay 5, 2022No Comments

I am endlessly impressed with Jim Gavin, as a leader, coach, mentor and overall decent human being. It’s an honor for us to represent Jim on the speaker circuit. Whether he’s talking about his time with Dublin Senior Football, his early influences, how Philosophy has shaped his thinking and leadership style, his work with the Aviation Authority or his new role as Chair of a New Citizens Assembly Panel, Jim always talks with integrity and with a perfect blend of head and heart. 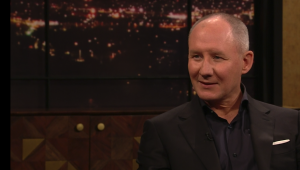 If you missed him on last Friday’s Late Late Show, here is the Clip and below are our highlights of the insights and experiences he shared.

From his earliest days, Jim’s parents were the “two big leaders” in his life. His mother, a teacher; and his dad, a haulier, instilled in him a strong work ethic, a desire to give back, and the sense that a future where he and his siblings could realise their potential was possible — one where they could ‘be the best you can be’. As his Mum used to say “Set your goals high.”

Jim promotes both the values instilled in him in his youth — hard work, giving back, respect for community — and the guiding ethos of his training in the Irish Defence Forces: “Serve those that you lead’.  For him, it’s all about empowering others to make good decisions. Of their teams as much as their clients, leaders should always be asking themselves:  “Are we serving your needs?”

Leaders should always be asking themselves:  “Are we serving your needs?”

From his time in the military, Jim has nothing but ‘great memories.’  It was there that he learnt the value of preparedness – of having a plan and being trained to respond to any number of scenarios, particularly under pressure.  Prepare correctly, and then when a particular scenario materialises, you don’t simply react. Based on training and intent, or purpose, you respond. Because they come from an informed, more assured position and mindset, your decisions are far more likely to be better. Anyone who followed the Dubs during Jim’s tenure will have seen this philosophy in action, as Jim and his backroom team worked to empower players to make decisions in the moment, on the field of play. The results speak for themselves.

Of all the schools of Philosophy, Stoicism holds special appeal for Jim. To those who watched him on the sidelines, this will come as no surprise; he was perhaps the most inscrutable of all managers. Stoicism “is all about controlling the things you can control,” as he told Ryan on Friday. The Stoics say, “It’s not things that make us angry, it’s our judgment of things.” So you learn to focus only on ‘useful emotions’ and let others go. Ultimately, our judgment — our ability to make the right decisions in the moment — depends on how empowered we are to make those decisions.

“It’s not things that make us angry, it’s our judgment of things.”

To anyone hearing him chat to Ryan, this last statement will come as no surprise.  As Ryan himself said when wrapping up the interview, “This has been a masterclass in leadership, thank you, Jim.”

Jim’s speaking work is all about helping leaders to support people to perform at their best, play to their strengths and become resilient, creative and responsive under pressure. Just as Jim strove to do with the Dubs.  Please CONTACT US  if you are interested in learning more about Jim or in having him speak at your event, do a masterclass or deliver a leadership programme.

Get a heads up when new articles go live